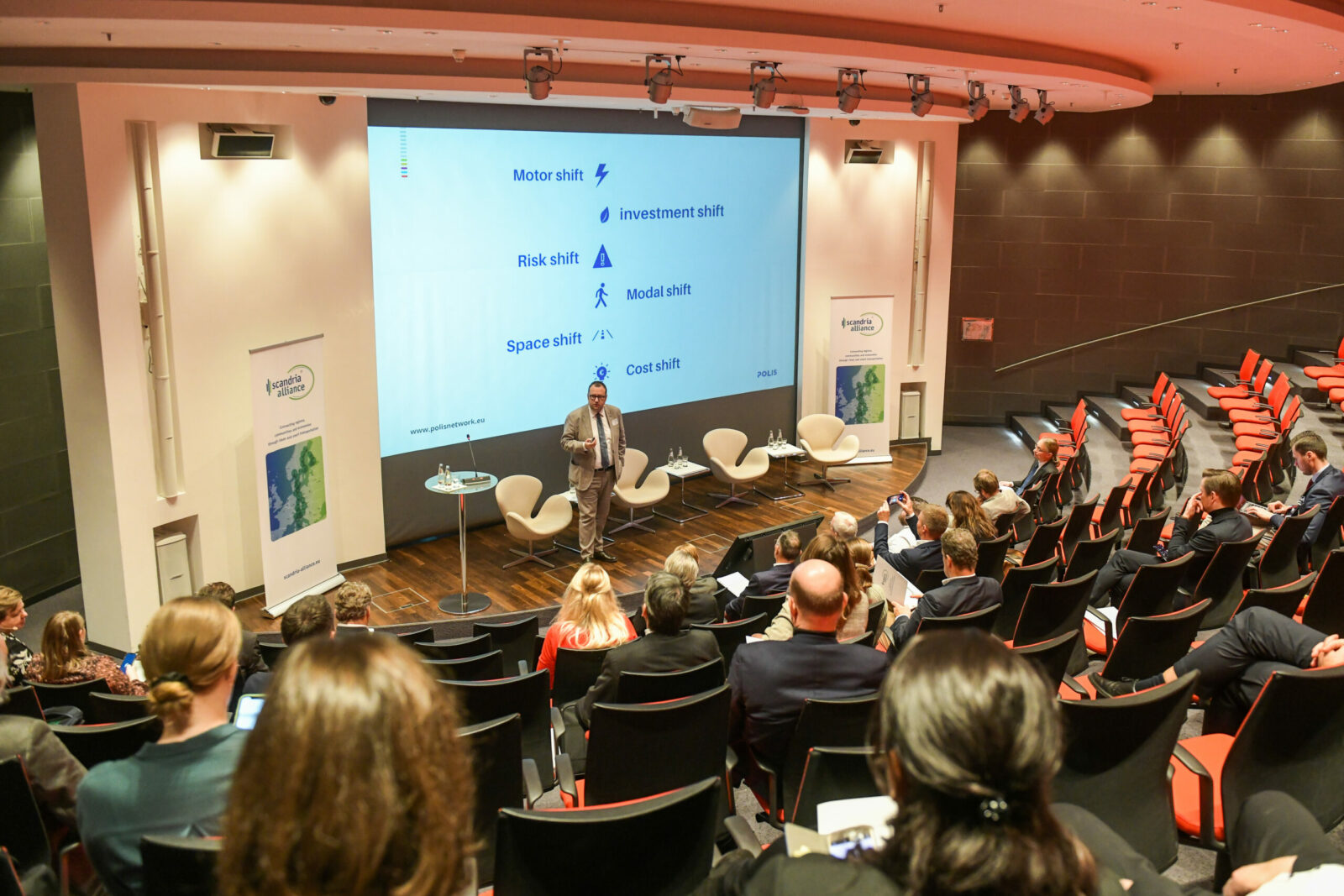 As part of our General Assembly on 7 October 2022, distinguished experts and political representatives of Alliance members discussed the role of urban nodes in the TEN-T network. In his opening, Guido Beermann, Minister of Transport of Brandenburg and chairperson of the Scandria®Alliance, stressed the importance of urban nodes for the overall transport network’s performance. A functional urban area approach would be essential. Thanking all members of the Alliance for their contributions to the joint position paper on the European Commission’s proposal for revised TEN-T guidelines, released in June 2022, he appreciated the acknowledgement of such interventions by the European Commission and the European Coordinator of the ScanMed Corridor, Pat Cox. Manuela Hahn, Deputy Head of the Joint Spatial Planning Department Berlin-Brandenburg, focused on efficient and just use of public urban space as a key to build resilient and sustainable societies. This requires close cooperation across all governance levels and sectors. She highlighted that Berlin strongly believes in the value of international cooperation and the transformative power of European cities as formulated in the new Leipzig charter on urban development. She considers a bottom-up initiative of cities and regions such as the Scandria®Alliance an outstanding example of multi-level governance. In his keynote, Ivo Cré, Director Policy and Projects of the POLIS Network, embedded the mobility transition in a larger societal transformation process. We have to deal with a number of shifts at the same time – shifts in motorisation, investments, risks, modality, space and costs. This requires a paradigm change in transport planning: from capacity planning to city life planning. Leadership is needed to facilitate this process.
Ivo Cré welcomed the new EU Urban Mobility Framework as good guidance. POLIS members also appreciate the strengthened role of urban nodes in the proposal for the TEN-T regulation. Its implementation needs to address the interface between local, regional and long distance transport. POLIS is partner of the project MOVE21 which aims to set up an urban node observatory to support stakeholders. Ivo Cré invited Alliance members to contribute and to collaborate.

The following panel discussion looked into the challenges urban nodes have to face when integrating into the TEN-T network and valuable lessons learned. Jakop G. Dalunde, member of the European Parliament from the Swedish Green Party, stressed that so far, a majority of TRAN members welcome the proposed regulation in general and the strengthened role of urban nodes in particular. He underlined that well adjusted governance mechanisms and the commitment of national governments are required. According to Jakop Dalunde, we need to assess the broader European added value of infrastructure development beyond national borders and overcome the predominant “capital perspective”. Better connectivity of urban nodes has the potential to leverage and to balance socio-economic development. He emphasized that connectivity across borders is often not prioritized in national transport policy. Jakop Dalunde also expressed the need to clearly prioritize environmentally friendly transport modes such as rail or biking. According to Anjes Tjarks, Senator for Transport and Mobility Transition of the Free and Hanseatic City of Hamburg, fulfilling the provisions on urban nodes in the proposed TEN-T regulation is clearly a chance for Hamburg. However, the process itself remains a challenge. The example of Hamburg demonstrates why it is important to put a focus to urban nodes from a European perspective. Realising large scale infrastructure projects such as the Fehmarnbelt Fixed Link will not become fully effective if road and rail transport get stuck in Hamburg. Thus, the urban node needs to be empowered to be a connector. Currently, there is only one rail crossing over the Elbe river as it was 100 years ago. TEN-T can be very helpful, not only in terms of financing, but also by lifting projects of European added value to the national agenda. Anjes Tjarks agreed that leadership is needed and political decision makers have to practice sustainable mobility upfront. Siv Henriette Jacobsen, Governing Mayor of Viken County, stated that the shift to zero emission mobility has been very successful in Norway. In January 2022, 9 out of 10 newly registered cars were electric. However, Eastern Norway is far from paradise looking at congested highways, where daily 6.500 trucks are heading from and to Oslo. Siv Henriette Jacobsen stressed that there was a lack of investments into rail infrastructure, especially cross-border. To shift freight transport away from road, more commitment of national policy makers would be needed. Mobility transition needs to adress mobility needs of people and to mitigate climate change at the same time. Both zero emission individual cars as well as public and rail transport need to be supported. Mathias Lindström, Director of the Kvarken Council EGTC, elaborated on a specific case, the cross-border urban node Umeå–Vaasa. This vibrant link in the Swedish-Finnish Kvarken region is only partly reflected in the proposed TEN-T regulation: Whereas Umeå is listed as an urban node, Vaasa isn’t. However, functionally, Umeå and Vaasa are closely linked. Both ports are run by a cross-border company. The same holds true for the ferry operator, which has recently taken into service the ferry Aurora Botnia, a modern LNG powered ferry drastically reducing CO2 emissions. Looking at the proposed TEN-T regulation, he called upon European decision makers to take into account the catchment area of urban nodes and to pay special attention to cross-border links. Following the panel discussion, Martin Zeitler, Advisor to the European Coordinator for the Scandinavian-Mediterranean Corridor, stated he was happy to hear so much positive feedback on the proposed TEN-T regulation and the way urban nodes are addressed in it. He underlined that the European Commission’s approach to extend the number of urban nodes from 88 to 424 is a pragmatic one. It is a point of departure acknowledging the importance of urban nodes as connectors in and to the trans-European transport network. To better understand the role of urban nodes, basic data needs to be collected. To leverage connectivity of the TEN-T network through urban nodes, Sustainable Urban Mobility Plans / Sustainable Urban Logistic Plans are an essential requirement. Martin Zeitler stressed that the Commission does not intend to intervene into urban transport planning but to support urban nodes as accelerators of smart and sustainable transport. Thus, the concept will be handled as flexibly as needed and will be evaluated during the coming years. The European Coordinator for the Scandinavian-Mediterranean Core Network Corridor, Pat Cox, will support cities and regions along the corridor in governing the challenges related to urban node development also in future, via the corridor forum, ideas laboratories or other collaboration formats. Thus, the activities of the Scandria®Alliance are highly appreciated as they contribiute to collecting and channeling the needs of cities and regions along the corridor.

Press release on the 2022 General Assembly